You are here: Home / Archives for When was Samsung M32 released?

When was Samsung M32 released? 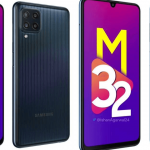 Samsung Galaxy M32. According to the exclusive information, Again Samsung is to be expected to launch its next flagship smartphone this month. Then Samsung has announced this Samsung Galaxy M32 will be expected to launch in India on 21st June 2021 at 12 noon. Although, this is Samsung’s first mid-segment 5G device in India. Now ahead of the release, this phone is now … END_OF_DOCUMENT_TOKEN_TO_BE_REPLACED